As we are searching for clues to understand what 2012 holds for us, these astrology cycles in January and February offer the mystical cornerstones to frame a big cosmic picture of change, evolution and possibility. As discussed in my recent January newsletter, the first full moon is offering us the wise gaze of the Grandmother Moon who is watching over us and making good on the prophetic teachings of several lineages that 2012 is the Return of the Great Mother.

Further signs of this restoration can be seen as we approach the first new moon on 1-23-2012 in sign of Aquarius which is also the beginning of the Chinese New Year and a Mars retrograde cycle in Virgo. Just as full moons are times of creative fullness, revelations and wholeness, new moons offer a respite into the quiet darkness of the void to reflect, release and renew. As all of life begins with a seed imbued with the code of its potential that must make a journey into form, the new moon offers a window of protection for that which needs the comfort of the dark to be free to commune with Great Mystery. It is felt that this is the most powerful time to do deep healing work of exploring what exists in the hidden parts of the self for understanding, cleansing and rebirth.  It is only after preparing the soul’s garden that we can entrust seeds of our hopes and dreams with a healthy environment resonant with growth.

The first new moon phase we enter into is in the sign of Aquarius. I like to think of this sign as the rebel with a cause as it has a bit of detachment and lack of sentimentality that is required if we are to let go of the attachments to the past that may limit the spiritual quest for self knowledge and actualizing one’s potential. Aquarius pushes us to think outside the box, exploring new possibilities for the self and for humanity. As Aries is moving through Uranus; ruler of Aquarius; there is a bit more of an impatient, fiery tone that can cause us to feel more of an impetus to change our lives right way.

The first new moon of the year often corresponds with the 15-day celebratory cycle of the Chinese New Year. The guardian of each year is part of a 12-year rotation featuring an array of animals as well as the five elements. 2012 hit the jackpot landing on the dragon, thought to be the most powerful energetic force casting good fortune, endurance and happiness. This dragon rides in on the elemental wave of water, which serves to soften, sooth and bring a yin-like balance to the intensity of the Dragon. The last time this combination reigned as the animal gatekeeper of the cosmic calendar was in 1952! 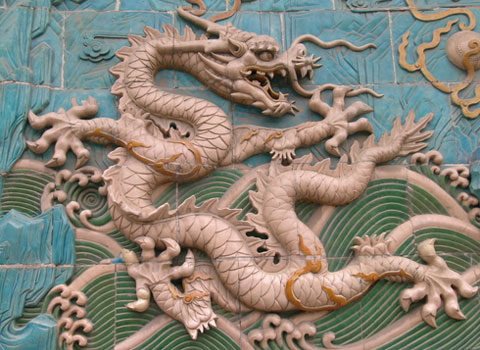 All animals hold special wisdom teachings that can be understood when we respectfully witness the life patterns unique to the species, yet the dragon is the only one of the 12 in the Chinese zodiac that is mythical in nature. How perfect that a creature associated with magic, imagination and overcoming our fears is leading us into a new era of transformative change. When I realized that this was the year of the water dragon my thoughts immediately went to Kuan Yin, the beloved goddess of mercy and compassion. Kuan Yin, like the water dragon, holds the power and grace of the divine feminine principle emanating unconditional love, forgiveness and liberation from suffering. Ancient and contemporary stories in language and imagery demonstrate her endless abilities to shape shift into as many as 33 manifestations to reach those in need of a dose of loving kindness and protection. To me, this Great Mother ascended master is ushering in 2012 on the back of the mystical dragon in support of a cosmic synchronicity to support the re-balancing and healing of humanity.

As I was meditating on the dragon I remembered a day years ago when I went to the Art Institute with my daughter’s class. First we toured the Asian art section, where many versions of Kuan Yin could be seen as part of the cultural history. As we moved into the section of European art, there were images of the hero/knight in active quest to free the princess held captive by the dangerous dragon in the dark cave. What struck me was not as much the cultural stereotypes of female and male per se but more the separation of the feminine into two aspects: the acceptable depiction as seen in the passive princess and her wild passionate power contained in the dragon that lived in the darkness of the cave. Really this separation of the mysterious undomesticated aspect of self was exiled from both genders. During this meditation, I was taken to a cave to meet a wisdom keeper and ally in support of healing disowned parts of the self, the shadow and ultimately reclaiming this primal power. Only a misunderstood mythic creature like a dragon could teach me to nurture rather than reject unacceptable aspects held in the bonds of outgrown judgment.

By accepting and appreciating the dragon, we can set the distortions free and liberate our energy and self determined path. As the revered Buddhist teacher Jack Kornfield states, “There are statues of fierce demons standing guard at the gates of most Buddhist temples. To enter the sacred space of the temple you must pass directly between them. The need for transformation of our demons is universal. We all suffer at times from our personal demons, whether those of confusion, anger, self-hatred, trauma, longing or loss. Collectively the force of these same demons create enormous suffering on the earth. We will have to face the demons with a great heart of compassion. We can learn to transform their energy and find freedom in their midst.” Another brilliant contemporary teacher of Tibetan Buddhism, Tsultrim Allione devotes an entire book to this quest for resolving inner conflict in “Feeding Your Demons“.

This auspicious 15-day window from 1-23-12 to the full moon of 2-7-12 is further supported by the beginning of a Mars retrograde cycle in Virgo, which shifts the aggressive warrior energy of Mars so that we can temper the Dragon using its fearless transformation energy to venture into our selves; dissolving self-sabotaging obstacles to make peace with ourselves. It is only with peace in our hearts that we can serve as activists for a more just and caring world.

As Virgo rules daily rituals and routines that support work and health, this new moon phase is a perfect time to initiate simple rituals that support and strengthen our desire to practice self love. This intention can be infused with any task that requires attention to personal care, the most simple being breathing in love and out fear or any two words that have associations with enhancing the quality of our lives and detaching from the portable prisons of our thoughts.

So open the doors in your house and heart to release old grudges, attitudes, patterns and habits letting the winds of change liberate mindsets, behaviors and emotions that do not support your higher aspirations. Practice acceptance and surrender to all that comes with the blessings of the water dragon as we ride these waves in service to the co-creative dream for our possibility. And keep some of this enchanted water to nourish your magical 2012 seeds of hopes and dreams!

2 thoughts on “Welcoming the Ultimate Power Ally for 2012: The Water Dragon”